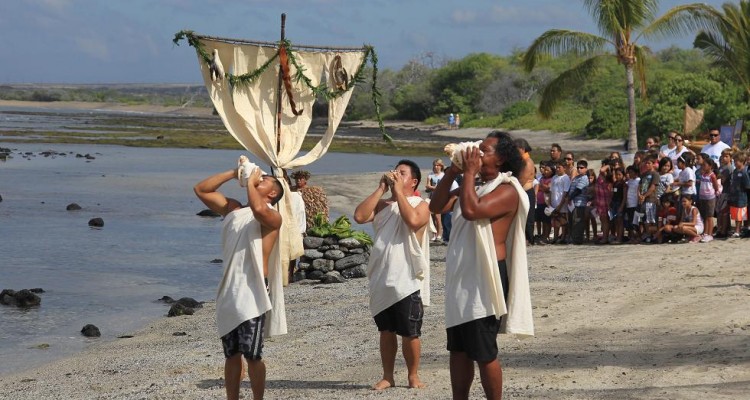 If you visited Hawai’i around this time, you might hear someone say “Hau’oli Makahiki Hou!” This is a diret translation from English: hau’oli meaning “happy,” hou meaning “again” or “new,” and makahiki meaning “year.” These words have a variety of other meanings as well.

Makahiki was broken up into three parts: cleansing and making ho’okupu, celebration, and wa’a’auhau.

In ancient times, Makahiki referred to the four-luner-month period beginning in late October or early November, signaled by the appearancfe of the Pleiades constallation above the horizon at sunset.

The Makahiki festival, which honored the god Lonoikamakahiki, marked the end of the annual farming cycle. The period, which happened to coincide with seasonal conditions- high winds, storms, rough seas, and heavy rains, placed a kapu on fishing, farming, labor, and war. These activities were associated with the god Kū, whose rituals were observed the previous eight months, and were forbidden during the season of Makahiki.

Makahiki was broken up into three parts: cleansing and making ho’okupu, celebration, and wa’a’auhau.

During the first phase, cheifs collected agricultural goods such as, taro (kalo), dried fish, kapa, and pigs. Other offerings, such as feathers, were also given. These were brought as offerings to Lonoikamakahiki at heiau (temples) and ahu (stone altars at boundary lines). Ho’okupu were collected around the island in a clockwise circle in a journey that took several days. Other offerings were nmade to the Akua Loa, or image of Lono.

Hula dancing, singing, feasting, and sports such as boxing, javelin marksmanship, bowling, and even sledding marked the second phase of Makahiki. Other games of wits were also played, including riddles, knowledge of secrets, and the recitation of genealogies. Some kanaka maoli even bet their own lives on these games.

The Tax Canoe – or wa’a’auhau – was set adrift in the third phase. Ho’okupu were collected and loaded onto a canoe. At the very end of the festival, the cheif would take off in a canoe and, upon returning, would be greeted by warriors attacking with spears. The cheif would have to parry or deflect the ohncoming spears to prove he was still worthy of ruling.

While most of the festival was left behind in history, some influences or this ancient celebration remain. Many Aloha Festivals take place in October to observe Makahiki. Some organizations still teach makahiki games to younger generations to preserve the ancient traditions as well.